Like every precious treasure, also the Cave shows its magic starting from its history.
It is certainly for everyone the Cavern, the Cave where Neptune or Poseidon, the God of the Sea, takes shelter. 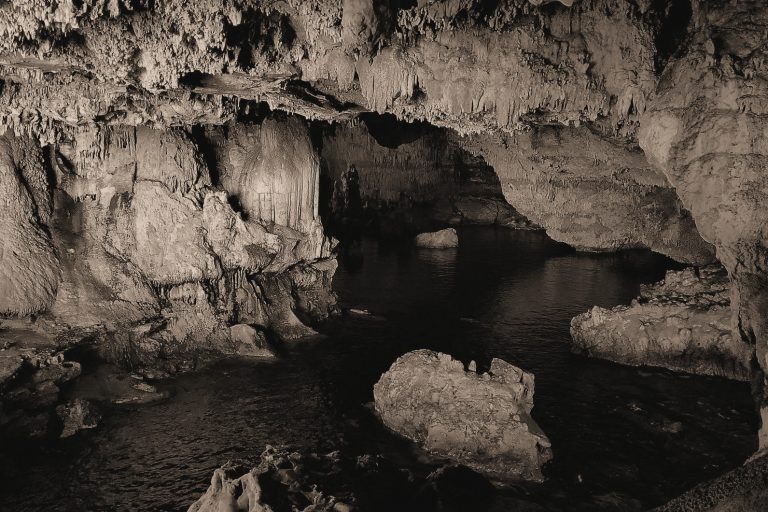 We have no certain news on who found out the Grotto.

He was probably a fisherman of Alghero named Ferrandino, around the end of 1700. Other sources however claim that the Romans present in Portus Nymphaeus near Porto Conte, around the 1st century AD, ventured into this wonder of creation. Moreover, also in the nearby Green Grotto, archaeologists have discovered the remains of ancient civilizations, confirming this hypothesis.

It is certainly for everyone the Cavern, the Cave where Neptune or Poseidon, the God of the Sea, takes shelter

Also princes and princesses, kings, high-level personalities and Italian and foreign scholars, ardently desired to go inside. Charles Albert Prince of Carignano, who later became King of Sardinia, visited the Cave on three occasions, the first time accompanied by the great scholar of Sardinia Alberto La Marmora, the second one together with his firstborn son Vittorio Emanuele, the future King of Italy. A third time an English traveller of the 19th century, had the honour of visiting the Cave with him, giving us a written report in a work that became famous all over Europe. His name was John Warre Tyndale. In “The Island of Sardinia” (London 1849), he described not only the town of Alghero and its beauties, but also the whole of Sardinia, with a careful perspective taking uses and customs of the Sardinian people as well as various details and similarities with other cultures, as only a true traveller can do. 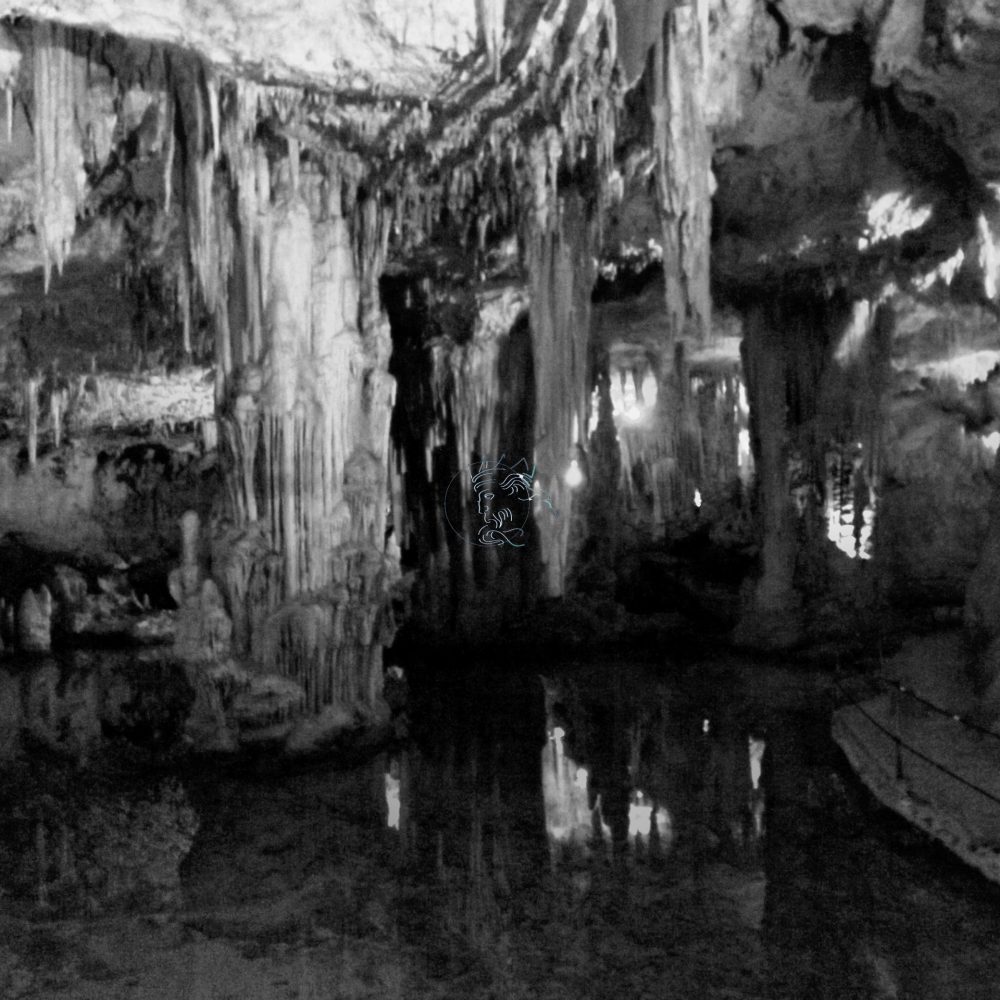 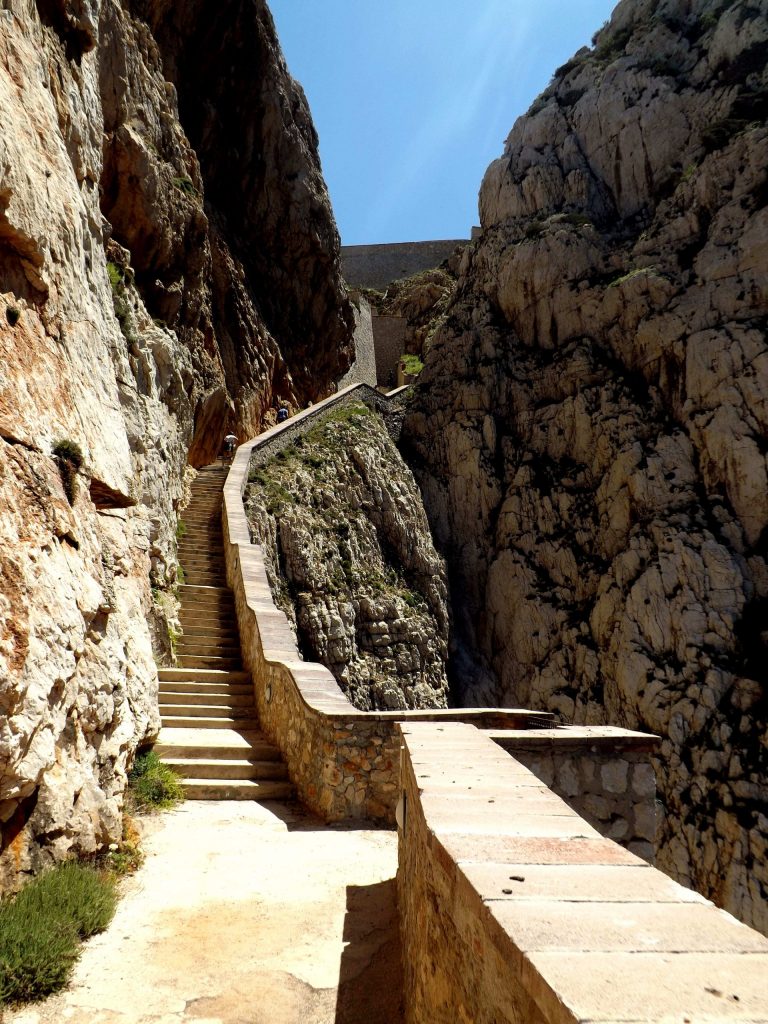 L’Escala del Cabirol (Roe Deer Staircase, in English) was intended to facilitate the entry to the cave. Andrea Massala, first Sardinian writer who described the Cave, said about some projects for entering and exiting the Neptune’s Cave without having to deal with the whims of the sea: “We must frustrate in any way its dangerousness!” The human genius however wanted to get close to that of the god of the sea. l’Escala del Cabirol was opened in 1954 ( a plaque remembers this event, just at the beginning of the path towards the Cave). This great work is from many sides attributed to Antoni Simon Mossa, who was an architect and a philosopher with the role of Superintendent of Cultural Heritage, during the construction. The staircase is 400 meters long and winds in zigzag along a frightening, overhanging wall, 119 metres high, just like the roe deer did once.

A tourist-sporting attraction connected to the Neptune’s Cave, which is “one of the most daring and suggestive staircase of the world, on rock walls of grade - 6." (Italian Touring Club)

In 1999, the geo-naturalistic importance of the area in which the cave is located, has been confirmed by the birth of the Regional Natural Park of Porto Conte, an exceptional patrimony of biodiversity to which joins the Marine Protected Area of Capo Caccia and Isola Piana for the protection of the Mediterranean species. Moreover, the Park was born to safeguard a rare concentration of archaeological testimonies of great interest.

For about 150 years since its discovery, the visit to the Neptune’s Cave (Coves de Neptú in Catalan of Alghero) was always organized with the same system by a committee that invited people of Alghero and neighbouring municipalities which enjoyed an adventure, only in the summertime by several boat rentals.

As told by the speleologist and connoisseur of the history of the site, Mauro Mucedda (Guide to the Grotta di Nettuno, 1994), The gathering took place at the harbour, in the evening, with everybody's great excitement. They left after midnight: a charmful journey donated by the glitter of the boats along the route of approach.

On arrival at destination at the crack of dawn, the first task was to light the grotto; the makers were some sailors which, before the tour group, put thousands of candles on the most adequate points of reference.

Then visitors were gradually transported by a small boat in the little lake within the cave, until getting to a tiny beach where at special events people were allowed to dance at the sound of an orchestra in the so-called Tribuna della Musica or the Music Tribune. The musical notes resonated within the amazing and at the same time mysterious landscape. 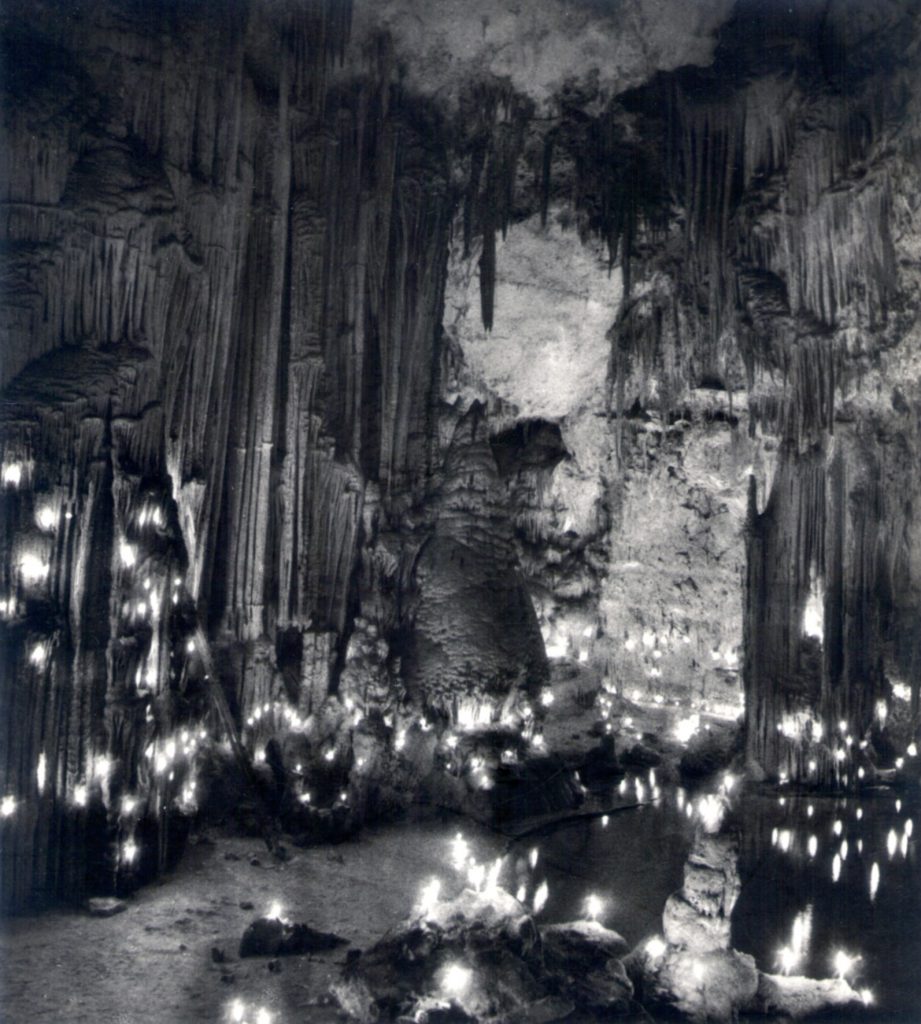